The battle between the respective fandoms of Fox’s The Orville and CBS All-Access’ Star Trek: Discovery has been raging ever since the two shows premiered within weeks of one another back in September of 2017, but the purported feud may have reached new heights this week when the Seth MacFarlance-created homage/spoof of the long-running science fiction franchise lifted a plot point directly from the first season of Discovery.

In what has to have been a conscious decision, seeing as the episode aired the same night as Discovery’s second season premiere, the plot of The Orville’s “Nothing Left on Earth Excepting Fishes” revolves around Captain Ed Mercer (MacFarlane) taking his new girlfriend, Lieutenant Janel Tyler (Michaela McManus) on a romantic trip away from the titular ship they work on. They are quickly the target of an attack by the nefarious Krill, often the foil for Mercer and his crew. The two are taken hostage and Mercer is forced to give up his command codes to his captors, fearing that they’ll harm Tyler. It’s however quickly revealed thereafter that Tyler is actually Telaya, a former Krill schoolteacher who Ed encountered in the season 1 episode “Krill”, in which he and Lt. Malloy pose as Krill officers in an attempt to recover a copy of their sacred religious text, the Ankhana. The mission goes awry when they learn the ship is in the midst of destroying an innocent colony, so they use the opportunity to kill everyone on board; with the exception of Telaya and her classroom.

Telaya vows revenge and attempts to deliver it in this episode, after being introduced as Lt. Tyler last week, where she begins her catfishing of the captain. Shortly after the revelation and after an alien attack on the Krill warship, Telaya and Ed are forced to take an escape pod to a nearby planet and work together in order to send a distress signal from the top of a mountain. With the Krill’s sensitivity to natural light, they’re also forced to spend a lot of time together in a cave, where Telaya explains how she was radicalized following Ed’s ruthless murder of her shipmates, her brother counting among the casualties, and elaborates on the Krill’s way of life and beliefs.

It’s actually a pretty evocative episode that does the most work so far to build a larger universe for the show and developer Ed as a character. This second season of the show has been a little weak so far, the episodes feeling disparate and somewhat aimless, focusing on relationship drama rather than any of the usual science fiction tropes. “Fishes” feels like the kind of classic episode of The Next Generation that we were always promised with MacFarlane’s show, which falls somewhere between homage and parody.

With “Fishes”, however, you can feel the show falling more into the territory of the latter, as it lifts its plot directly from a season 1 arc in what some fans might consider to be the competition in Discovery. If any of those details about Telaya/Lt. Tyler sounded familiar, it’s because they pretty much align directly with the Klingon Voq’s arc on the latter show.

In season 1 of Discovery, the Federation enters into a war with the Klingon Empire after a fanatical house leader named T’Kuvma starts a confrontation with Starfleet. T’Kuvma dies in one of the intial encounters, and one of his followers, the albino Voq (played by Shazad Latif) vows revenge, and that T’Kuvma and his teachings will be remembered. Voq undergoes reconstructive surgery to take on the identity of one Lt. Ash Tyler, a casualty of the war who appeals to Discovery’s captain, Gabriel Lorca, and finds his way onto the ship as its chief of security and, eventually, a love interest to Michael Burnham. After his true nature is revealed, he and Burnham are forced to work together to stop the war despite his inherent betrayal. 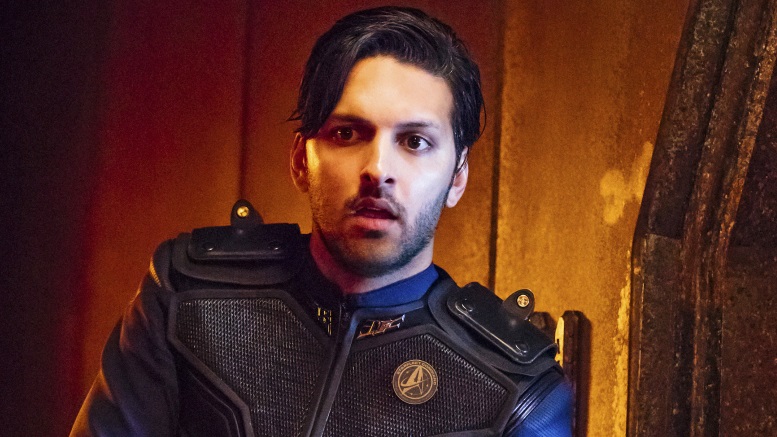 There are of course some differences between the stories. Voq’s memories are wiped when he becomes Tyler, in order to maintain his status as a sleeper agent. And his arc plays out over the course of most of the first season. But the similarities are remarkable, even beyond the obvious clues such as naming both human counterparts Lt. Tyler. In both instances, the alien version of the character is lower on the totem poll in their society, thrust upwards and radicalized by a life-altering event and a perceived slight from the enemy. The Discovery Klingons we see in season 1 and religious fanatics, much like the Krill in The Orville, and both seek galactic domination at the expense of the humans. Both of their human versions seek the favour of their new captain, both seek a relationship (in The Orville both roles are fulfilled by the same person) and both are forced to work with the person they betrayed in order to save the day.

And to be honest, both stories are well-done. The Orville, despite making a strenuous callback to the first season and only spending part of a single episode developing the story, makes the most of its time with Telaya/Tyler and uses it to further Ed Mercer’s arc and character development and contextualize why we should care about this show’s version of the Klingons. And while many might not like the character design of Discovery’s Klingons, I spent a lot of time talking about how, esoteric looks aside, they did a good job of updating the side of the species that we do see to the kind of villain one would expect from a science fiction show depicting a futuristic conflict with allegories to present day problems. To put it more simply, I always saw Discovery’s Klingons as a combination of Space ISIS and white nationalism, and there’s actually a lot of depth to them. Voq/Tyler’s arc also has a lot to say about PTSD, religious beliefs, identity and other things, and of course plays out over a longer period of time.

So I don’t really mean to slag on The Orville because they clearly knew what they were doing here. I do, however, question their motives, because not only are a few too many of the details too similar for this to be an homage rather than something akin to a warning shot, especially with Discovery moving to the same night as The Orville, but “Fishes” was also written by two people known for their work on Star Trek ever since TNG, Brannon Braga and Andre Bormanis.

Funny enough, though, Discovery also featured what had to be a shot across the bow of The Orville’s hull, as a weirdly comedic turbolift scene ending in a bit of physical humour is very reminiscent of a recurring gag from The Orville featuring an alien crewmember named Dan.

With Discovery’s concerted effort to adopt a lighter tone with a little more humour, its dig at The Orville could probably seen as a little more light-hearted than an entire arc lifted from a competing show, especially with a fervent fanbase that is quick to judge these two shows against one another even though they are completely different things. I hate taking a side in this debate because I really do enjoy both shows, but for all the talk among fans of how positive The Orville is and how much more in line it is with Gene Rodenberry’s original vision for Star Trek (allegedly, I don’t necessarily believe that), it kind of leaves a bad taste in my mouth to see two writers who are likely bitter that they don’t get to work on the franchise anymore coming real close to actual plagiarism. It almost feels malicious when you really lay it out, or as if they’re encouraging their fans to further bully anyone who likes Discovery. It would have been way simpler and nicer to merely reference something from the show or even straight up make fun of them. If there is indeed a feud between the shows, this won’t help it.

Personally, I choose to continue enjoy both  of them. I think both bring something interesting to the table in this day and age of modern science fiction. The Orville can be an episodic throwback that looks at modern issues from the lens of a well-worn format. Discovery can do what I personally believe is the more “Star Trek” kind of thing and actually push the medium forward by adapting modern storytelling techniques including the more complex serialized storytelling of Voq’s arc. I’m glad that both exist, and I hope that they can find a way to coexist. Fans should be happy to have two shows operating in similar space, yet doing wildly different things in such good ways.

View all posts by George Prax

One thought on “The Orville Copies Season 1 Plot Point From Star Trek: Discovery in Latest Episode”